"Carl Edmond Fuller" is a retired professional basketball center (basketball)/center who played two seasons in the American Basketball Association (ABA) as a member of The Floridians (1970–72). He attended Bethune-Cookman University where during the fifth round of the 1968 NBA draft, he was selected by the Detroit Pistons, and during the ninth round of the 1967 NBA draft, he was also selected by the Atlanta Hawks/St. Louis Hawks, but never played in the NBA.

They've improved from the last time that we played them. They swung the bat and hit the ball well tonight.

We're just struggling with our hitting. You can give up a few runs if you can hit the ball, but we just can't score enough. And the errors in the second game hurt us too. 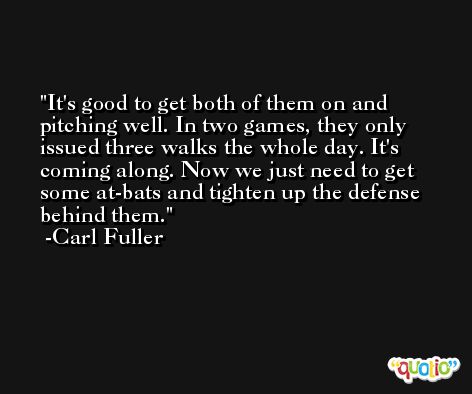 We had the bases loaded after they had an error. Then the wild pitch scored a run.