"Rebecca Paul Hargrove", professionally known as "Rebecca Paul", is currently the President and CEO of the Tennessee Lottery. Prior to assuming her current position in 2003, Paul gained national fame within the lottery community for operating lotteries in Illinois Lottery/Illinois, Florida Lottery/Florida, and Georgia (U.S. state)/Georgia. As in Tennessee, Paul was recruited to Florida and Georgia for the explicit purpose of starting up those lotteries from scratch.

In 1986 Florida voters elected Republican Bob Martinez as governor, and at the same time, voted in favor of establishing a state lottery to aid education. The new governor recruited Paul as the state's first Lottery Secretary, due largely to her reputation for having turned the Illinois lottery from a moribund operation into one of the most successful lotteries in the United States. Paul was then brought to Georgia for the same purpose in 1993, after Georgia voted to start up a lottery as well.

We continue to refine all the things we do, be it working with retailers or refining things like ticket dispensers. 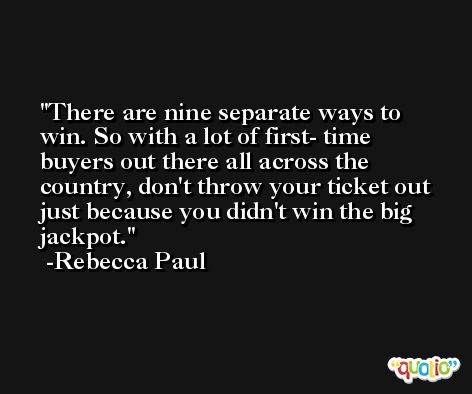