"Willie Mullins" is an Irish racehorse horse trainer/trainer and former jockey. He is based at Closutton, Muine Bheag, County Carlow, Ireland

He commenced racehorse training in 1988 having previously worked as an assistant to his father Paddy Mullins and Jim Bolger. Willie is a former six times amateur champion jockey in Ireland, winning the 1983 Aintree Fox Hunters on Atha Cliath and the 1996 Champion Bumper/Cheltenham Bumper on Wither Or Which.

He is the trainer of the 2005 Grand National winner Hedgehunter and the 2011 and 2013 Champion Hurdle winner Hurricane Fly and trained the horse, On His Own in the 2012 Grand National . He is also trainer of the six times David Nicholson Mares' Hurdle champion, Quevega. and Neptune Investment Management Novices' Hurdle/Ballymore Properties Novices' Hurdle champion, Mikael d'Haguenet.

Willie Mullins has a son Patrick Mullins who is currently an Amateur Jockey riding mainly in Ireland for his father.

I'm hoping we'll be a bit closer this time. We'll decide whether to go for the Gold Cup afterwards.

We haven't made a decision yet but we will probably do so at the weekend. 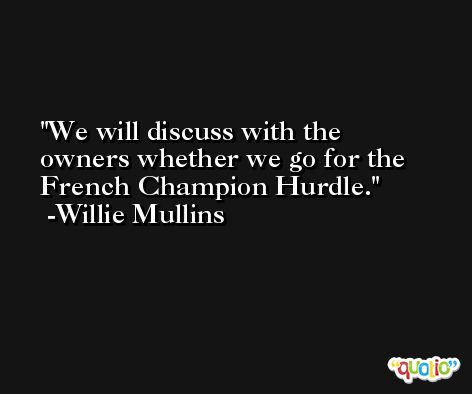 He won well last year so it's come as no surprise to see what he has to do this time, but it's a big task.

It was a great run. For a long time as they came up the straight, I thought he might do it. The rain wasn't a help but we take what we get. 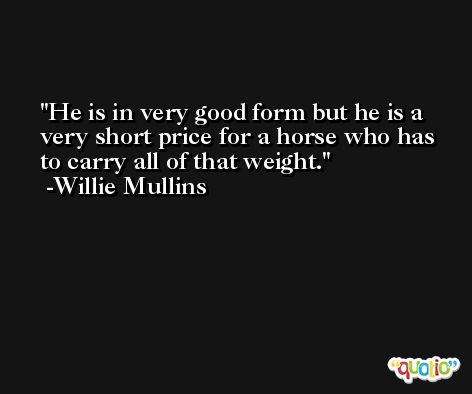 David said something jumped across him at the second, and that frightened the life out of him. He took a bit of time to get his confidence back after that, but maybe it was a blessing in disguise because that way he didn't get into the race too soon.

I never thought I'd say this but you could argue that he's a bit of a handicap snip now!